"I think you're wonderful"-Grandma Gloria

Because no matter what, Grandma thinks I'm s'marvelous... Even when I made the indisputably bad decision of being a blonde for a short time. 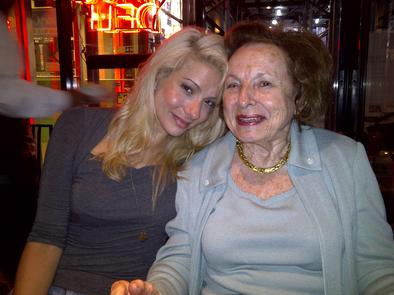 Broadway.com's Fresh Face profile, "Stealing the show as Arielle, the sexually adventurous talent booker for Brooklyn Bowl, in off-Broadway’s F#%king Up Everything."

"For this show [Lysistrata], the statuesque Equity actor Lisa Birnbaum carried the title role with boldness and energy." -BroadwayWorld

"“Arielle’s,” a song about Arielle’s (Lisa Birnbaum) areola, is particularly unforgettable...In the midst of a strong cast who can belt songs like the best of them, Lisa Birnbaum stands out with her superb performance as Arielle, the sex-crazed band-booker for the Brooklyn Bowl with a “Fuck-It List” and a soft-spot for love sick nerds."

"However, it is the sexy Arielle (Lisa Birnbaum) who makes the most of a small role. In the show-stealing scene, she sings about her bucket list, which is actually her own way of extending her own needed debauchery. Think Johnny Cash’s “I Been Everywhere,” but with a more “internal” meaning. At the same time, Arielle has a heart and is able to connect the viewer to the story’s larger premise. For such a small role, Birnbaum captivates quickly and makes herself an important part of the production."

"The other standout is Birnbaum, as band-promoter Arielle.  A riot-grrrl Lucille Ball, she steals basically ever scene she is in."

"Janice, the ball-busting beauty, is given a sensational second-act entrance, but the real magic is in the pouting smirk and dagger glances of Lisa Birnbaum, who plays Janice as less of a bitch than as an attractive woman who’s had to lace herself up in so much protective armor that she’s smothering herself."-New Haven Theatre Jerk